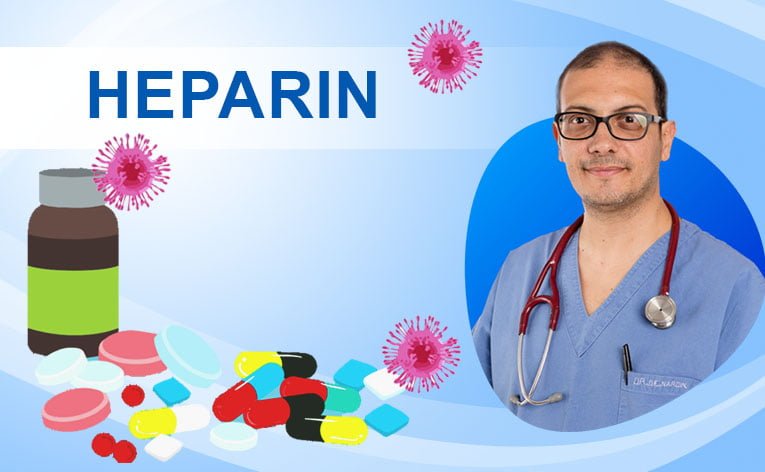 As you may have heard from recent media reports, heparin is being considered as treatment for COVID-19. Though it sounds apparently promising news, we must always try to orient ourselves with the weight of it all.

Let us first try to understand what heparin is normally used for and then determine whether or not it can be useful in COVID-19 and why this is so.

Heparin: What it is and what it is used for

“Heparin” can mean the specific name of the drug, or the category of drugs, heparins (e.g. Seleparin, Enoxaparin…etc.) which have a similar action to the particular drug Heparin.

Since heparin is an anticoagulant, it prevents the phenomenon of blood clotting.

Normally, when blood flows through our blood vessels, it doesn’t need to clot, it flows smoothly, and no hitches form. However, blood has the ability to “coagulate”, it “grows” and forms a clot of blood during certain conditions.

Blood clotting may occur when there is a bleeding, as in an outflow of blood from the body. In this case, the blood clot can form a plug that prevents further blood from leaking from the injured vessel and thus avoid massive bleeding. The mechanism that allows coagulation is a cascade system that is activated by certain trigger situations. In the example of hemorrhage, it is the contact with the air outside the body that triggers the cascade of coagulation.

The speed of blood in the vessels also affects the possibility of it clotting. When it flows too slowly and tends to stagnate, it is possible that the coagulation cascade may be activated erroneously.

When the blood begins to clot erroneously inside the blood vessels, it is called “thrombosis”. In thrombosis, the blood “congeals” in the wrong place, as in, right inside the vessels. This situation is dangerous because the blood clot that forms can obstruct the blood vessel in question and thus prevent the rest of the blood from flowing into that vessel.

Predisposing factors for thrombosis include both the genetic and environmental aspects. For example, prolonged immobility (such as during air travel, or after surgery) causes a slowing down of the blood flow (1) and favors the possibility that blood clots cause thrombosis.

A consequence of thrombosis: Pulmonary embolism

When thrombosis occurs in a large-sized venous vessel, it is called Deep Venous Thrombosis (DVT). There is a risk of pulmonary embolism, meaning that a piece of thrombus, a piece of the blood clot, can possibly detach and flow in the circulatory stream until it enters the heart, exiting from the right ventricle and ending up in the pulmonary artery, and from there into its branches. In this condition, a pulmonary embolism is formed, that is, a blockage of blood in the arteries of the lungs due to the clot of clotted blood.

In the case of pulmonary embolism, blood circulates more in certain regions of the lung and no longer reaches some alveoli, which are the areas where the blood should oxygenate. Because only a small amount of blood receives oxygen from the lungs, the body runs out of oxygen.

If the clot that detaches from the thrombus is of considerable size, then the resulting pulmonary embolism can be MASSIVE and can be so significant  as to making it impossible for the blood to pass. This case is generally a very serious condition which can lead to immediate and sudden death.

How is heparin used?

So, what is heparin for?

Use of heparin in the prevention of thrombosis

As we have described above, there are many conditions that predispose to the formation of thrombosis. In general, the lack of movement is one of the conditions that predisposes to thrombosis. Examples include prolonged air travel, surgery, and illnesses that force you to stay in bed. Thrombosis is more likely to form under such conditions. In order to prevent thrombosis in these cases, heparin is used at LOW DOSES, i.e. prophylactic or preventive doses. For example: Seleparina 4000 IU per day.

In this case, the heparin prevents the formation of thrombosis, or, if thrombosis was already present, it hinders its worsening.

The side effects of low heparin doses are quite limited.

Use of heparin in the treatment of thrombosis

Once thrombosis has already formed, low prophylactic heparin doses are no longer enough to eliminate it, at maximum, it will only “freeze” it. In the case of thrombosis already in progress, a HIGH or THERAPEUTIC DOSE, which is 2-3 times higher than the dose of prophylaxis, is needed. For example, 4000 IU twice a day or more. Basically, at least double the low dose.

By doubling the dose, side effects may also increase. Hemorrhages are quite frequent due to the fact that the blood no longer coagulates. If a microscopic vessel in a region of the body were to break, the damage would not easily be repaired due to devastating consequences. The most frequent bleeding during therapy with heparin at a therapeutic dose are cerebral hemorrhage and retroperitoneal hemorrhage (behind the abdomen). This is the reason why, while thrombosis prophylaxis is performed with great ease, the possible dose for the therapy of thrombosis must be carefully evaluated, weighing it with the possible risks of bleeding.

Why does the COVID-19 coronavirus cause so much damage to the body? It is certain that there is pulmonary involvement, i.e. a lung pathology, called INTERSTITIAL pathology, is involved. The areas of connection between the alveoli, a bit like in a space station, are passageways connecting various modules that can be stopped. 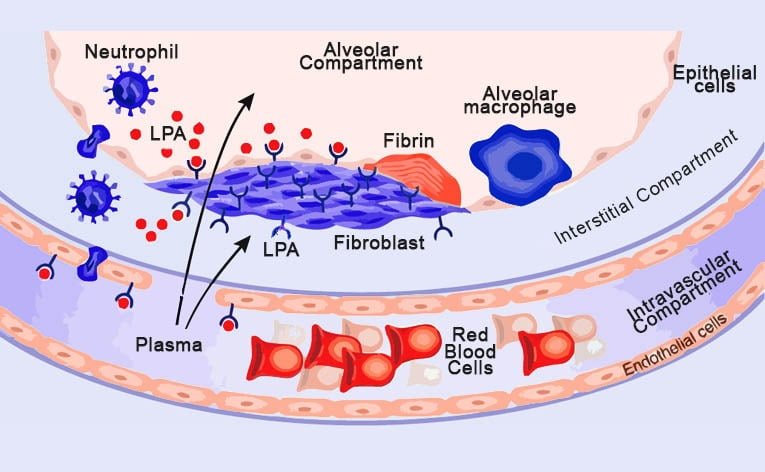 In the image above, we see what generally happens in a lung interstitial disease. When there is a problem to be solved in the area of ​​the alveoli (the pink part of the image), both molecules and inflammation cells come out of the blood and create interactions. In the case of the coronavirus, immune system cells and molecules would go there to destroy the virus, infected cells, etc.

Now there is no doubt that COVID-19 is a disease of the pulmonary interstitium. What makes scientists’ discussion continue is attributing the right weight to the mechanisms of damage to the interstitium. In other words, there are various types of damage, but which is the prevalent one? Let’s enumerate  the possible damage mechanisms:

Well, which of these mechanisms is prevalent in the pneumonia or interstitial disease of COVID-19 patients?

What evidence do we have regarding these hypotheses? As we have said, it is undeniable that interstitial lung disease is present because it is documented in the CT scans of COVID-19 patients. Here is an example: 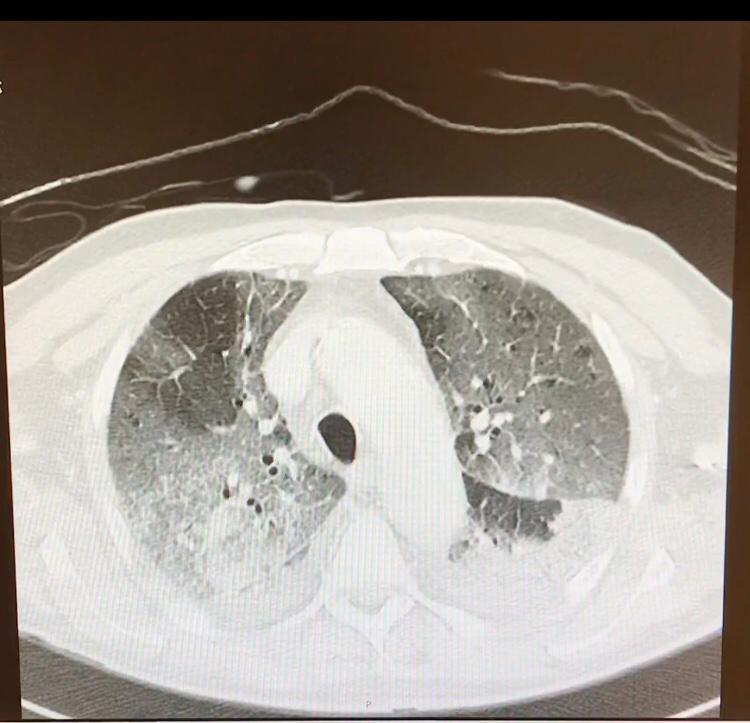 However, CT scans are not enough to distinguish whether the mechanism that leads to the increase of the material in the interstitium is due to the immune-mediated damage or the microcirculation damage.

As some scholars have reported (2), there are many autopsies that would check for microcirculatory damage in the lung. This testifies to the presence of a phenomenon of disseminated thrombosis in the pulmonary vessels of patients with COVID-19. However, it is not clear whether this finding is sufficient to explain interstitial damage itself, or a consequence of it. The matter is significant because it drastically changes the therapy. We will discuss it shortly.

The two rationales for use

Damage to the interstitium of the lung can be determined from:

The drugs currently used against COVID-19 which fight against the three mechanisms of lung damage:

News from the web

The use of heparin in COVID-19 therapy has recently come to the fore due to a widely shared post by a cardiologist. In this post, it was suggested that pulmonary microembolism or microthrombosis is the only cause of the interstitial damage, and that by treating it, 9 out of 10 deaths could be avoided (2).

The post somehow portrays the cardiologist as the discoverer of the simple and commonly used drug in our departments. But is this really the case?

Let’s keep in mind that heparin is used systematically in hospitals on COVID-19 patients:

This is what’s being done in the vast majority of Italian hospitals.

The post of the cardiologist, which was taken up by the press, consists in proposing to administer ALL COVID-19 patients the THERAPEUTIC dose of heparin.

This would support the hypothesis that the interstitial damage of the lung is EXCLUSIVELY due to the component of microthrombosis, vasculitis, or microangiopathy, and thus should be treated with heparin.

There is absolutely no evidence that this is really the case. It is just one of the many lines of hypotheses that are being made today in the face of this new disease of which little is known yet. The indiscriminate use of high-dose heparin on all patients with the coronavirus could lead to a disaster of considerable proportions.

On the web, it is often noted that heparin is a very safe drug. This is only true for prophylactic doses, but here we are talking about recommending THERAPEUTIC doses to everyone! This type of dosage is not free from risks and complications and can cause major bleeding. I myself have already seen three fatal cases of bleeding during heparin therapy in COVID-19 patients since the beginning of the emergency. Are we really sure we want to face the risks?

To conclude, heparin is certainly one of the various drugs available to reduce the lethality of COVID-19. In fact, it is already widely used at low doses for prophylaxis of thrombosis and at high doses for therapy of deep thrombosis and known pulmonary embolism. The appropriateness of increasing the dosage to reduce the component of pulmonary microvascular thrombosis in determining pulmonary interstitial disease should be carefully considered. There has been recent news (4) that AIFA has authorized a study on the safety and efficacy of heparin, in different doses, on patients with COVID-19. As we wait for the results, we can only consider heparin as one of the many known weapons at our disposal. It certainly can not yet stand as a resolute panacea for each COVID-19 case.