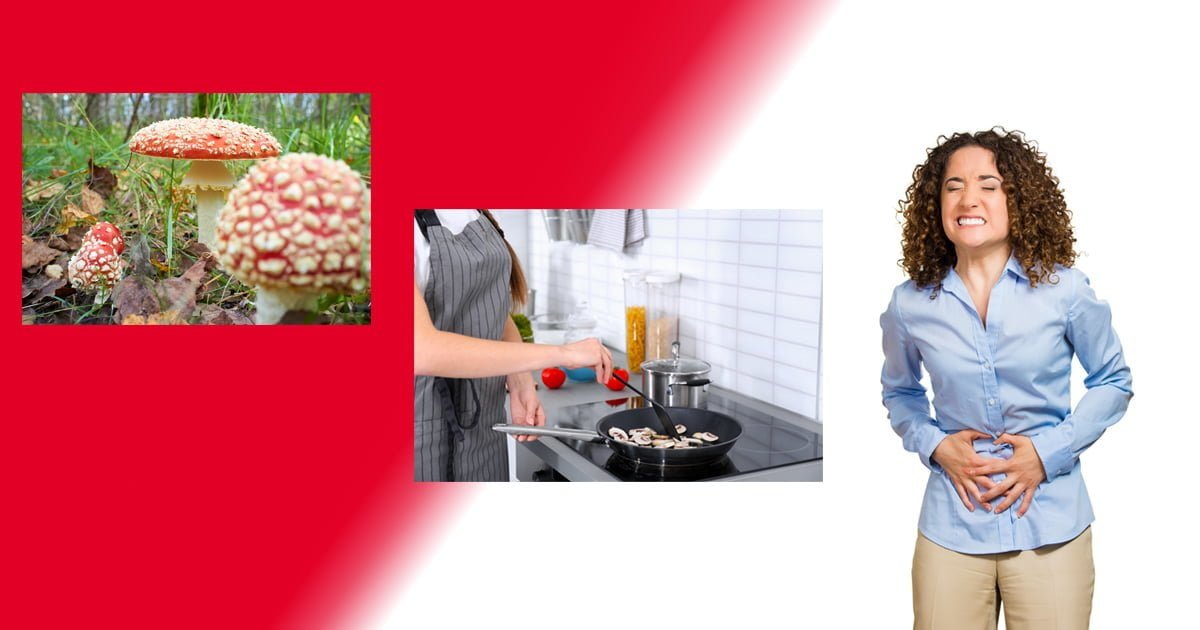 How do we prevent mushroom poisoning, and, if it happens, how should we intervene? Let’s find out together!

When mushrooms are poisonous …

Sometimes even an expert collector can be misled, and instead of edible and harmless mushrooms, poisonous species end up on the table.

In the story “Funghi in città” by Italo Calvino the protagonists of the unexpected Sunday collection end up in the hospital and the story ends with a collective gastric lavage, fortunately without serious consequences.

Unfortunately, however, the outcome of a mushroom poisoning is not always as favorable as in the story!

Did you know that in Italy in the last 20 years, despite information campaigns, there have been hundreds of mushroom poisonings? To avoid getting bored with numbers and statistics, let’s just say that, taking into consideration the entire national territory, the numbers are really worth looking into. There has been 13,884 requests for advice from the Poison Control Center in Milan from 1995 to 2011, during which 37 deaths occurred and in 15 cases liver transplants had to be done (1).

If you are not an expert and you want to avoid risks while at the same time giving yourself a chance to walk in the woods to collect mushrooms, it would be a good practice to bring your collected mushrooms for examination at the nearest mycological service center of your ASL – the service is free! Found out more by clicking the link below!

The reason why mushrooms can become poisonous is the presence of poisonous toxins. Toxins are toxic substances that can specifically affect certain cells in our body. Some are directed against the digestive system, others specifically against the nervous system, and so on. The type of disorders that can be triggered depends on the type of toxin.

The extent of the disorders depends on the type, the dose and the lethal power of the mushroom’s toxin, which in turn depend on many factors: first of all the type of Mushroom consumed (and therefore the type of toxin ingested), then it is necessary to consider the geographical area of ​​origin, the season, the method of preparation, the quantity of toxin ingested and the individual response to the latter (2).

Generally the ingested toxin first reaches the gastrointestinal tract where it causes damage of varying severity, generating the classic symptoms of gastrointestinal poisoning, such as vomiting, abdominal pain and diarrhea: these generally occur fairly quickly after ingestion of poisonous mushrooms, from 30 minutes to 6 hours. They normally resolve within 24 hours and are low risk for life. In more rare cases the symptoms may appear after 6-20 hours and may mimic both a trivial gastroenteritis and an influenza, underestimating the(se) symptoms run the risk of delaying diagnosis and thus delaying treatment! 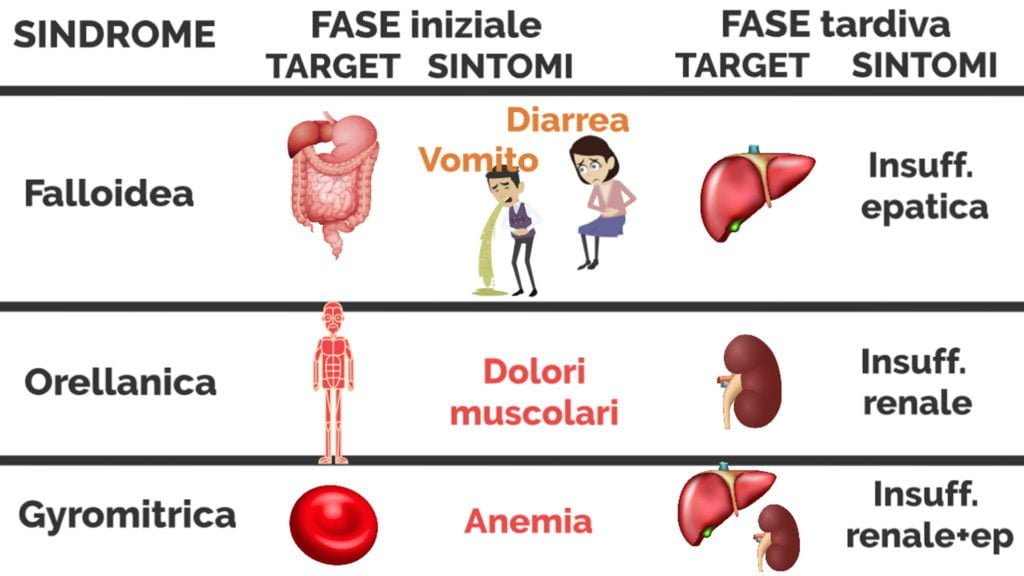 – the phalloid syndrome is characterized by repeated vomiting and diarrhea that rapidly lead to a serious state of dehydration; after the first phase of gastrointestinal disorders there is a second phase that foresees the progressive degeneration of the liver that is severely affected by the toxin

– the  causes muscle pain (sometimes associated with the appearance of skin redness), headaorellanic syndromeche, reduction in the amount of urine produced, chills and loss of appetite. This syndrome can rapidly develop into kidney failure.

– the gyromitra syndrome causes drowsiness and muscle pain and evolves towards a haemolytic anemia (a form of anemia where red blood cells are destroyed) with damage to the liver and kidneys (3).

Diagnosis and treatment of mushroom intoxication

Rapid diagnosis and timely treatment lead to increased chances of survival. For this reason, anyone who has the suspicion of mushroom poisoning should contact the nearest emergency room as quickly as possible, taking with him the mushrooms he has eaten, both cooked and raw. This is because in the emergency room an expert mycologist can look into it, and he/she can identify exactly the species consumed. With this information, the poison control center is contacted to suggest the most appropriate therapy for each form of intoxication.

There are no specific antidotes for mushroom-related toxins responsible for intoxication, therefore the treatment will be finalized only to neutralize the damage caused by the toxin in various organs and systems of the body, reducing complications with the use (variable according to each case) of drugs against vomiting, drugs with toxin-absorbing properties or those that counteract the paralyzing effects on nerves or muscles (antiemetics, adsorbents, anticholinergics or anticonvulsants) (4).

What are the real long-term consequences of mushroom poisoning?

The prognosis depends largely on the individual characteristics of the person who is affected, at a greater risk are the children and the elderly. Rapid diagnosis and timely treatment can lead to increased chances of survival. When organs are affected, as in the case of the kidney for mushrooms that cause the orellan syndrome, even after recovery from the acute event; there can be long-term damage. Also in this circumstance the timeliness of the treatments plays a fundamental role for the reduction of long-term consequences.

The re-entry syndrome: what is it and how to deal with it?