The real danger of the Coronavirus 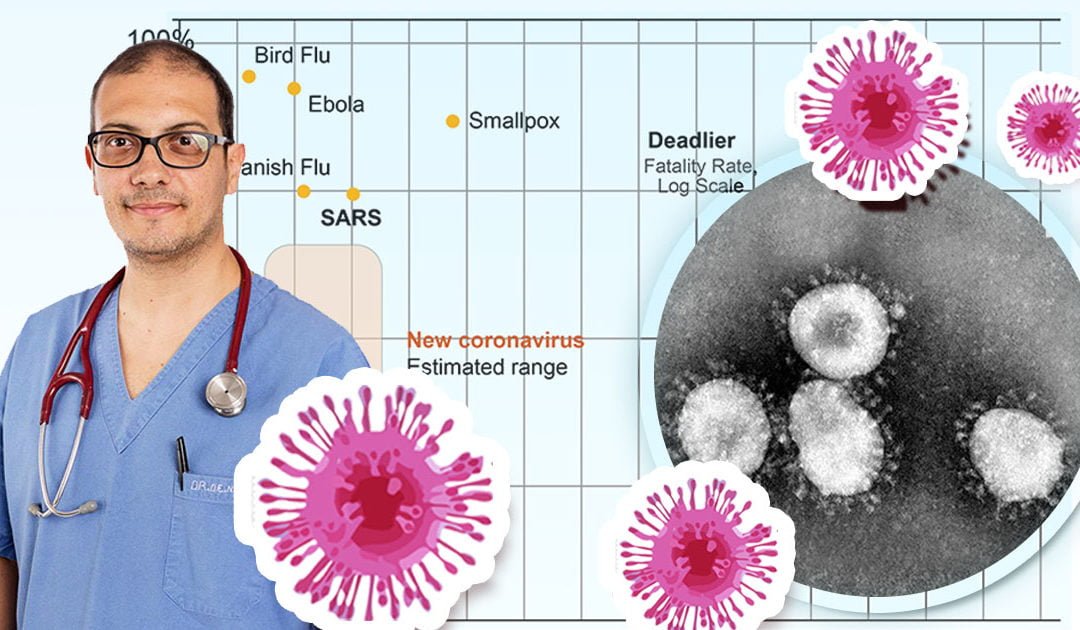 In this article, we answer the question: Why is the Coronavirus considered dangerous, if it just basically resembles the flu?

The two main characteristics that distinguish a virus are lethality and infectivity. For convenience, we have placed both parameters in a graph, infectivity in the x-axis and lethality on the y-axis, with a logarithmic scale. 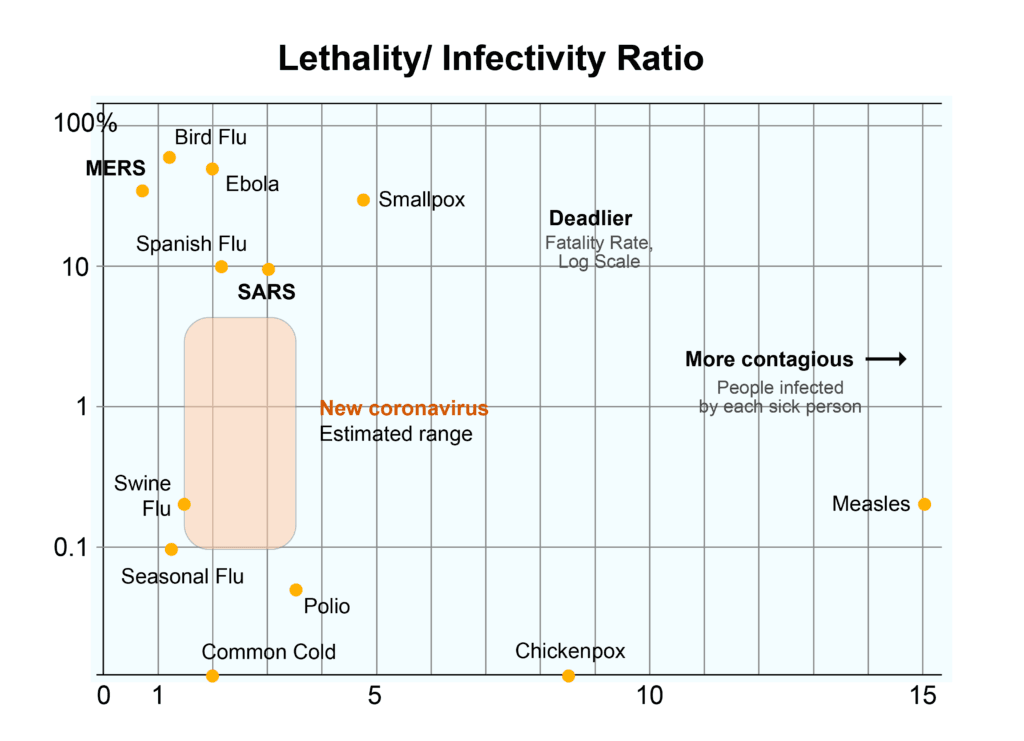 Lethality is the ability of the virus to create damage to the organs of the host organism, potentially leading to death. Therefore lethality is the percentage of subjects killed by the virus out of the total number of infected subjects. In the y-axis we find, from bottom to top, therefore in order of least to most dangerous, the common cold, polio, and seasonal flu, which has a mortality of less than 1%. In the middle of the graph we find SARS, which has a mortality of around 10%, similar to the Spanish flu that caused an epidemic in the last century. Far higher in the graph, we find lethal viruses, such as Ebola, MERS, and bird flu, which have a very high mortality.

So where is the location of the current Coronavirus in terms of mortality in the graph? It is not yet possible to determine it with certainty, so it has been estimated that it can lie within a range between 0.1 and 10%, that is, between seasonal flu (0.1%) and SARS (10%). The data currently collected and reported by the Chinese authorities, to date, dated February 4, 2020, is approximately 2.1% of deaths out of the total number of infected patients. This value is quite low, when compared to other really terrible viruses. However, this data alone does not determine the seriousness of a virus; it must be evaluated, as in the graph, together with infectivity.

As can be seen from the graph, it will not be possible to precisely define the location of the Coronavirus in the graph until the end of the epidemic. Certainly as time goes by it will be possible to further circumscribe the range currently highlighted in orange in the graph, obtaining more precise data.

The difficulty in determining the real mortality of the Coronavirus depends on the fact that it is difficult to identify all the infected subjects, which are the basis of the lethality ratio. It is possible that the number of infected subjects is significantly higher than the current estimates, given that the analysis kit in overcrowded hospitals with low resources is not easy to find.

In the same way, it is likely that the number of deceased subjects is also underestimated since the infection is spreading continuously. It takes time for a subject to be diagnosed with the infection, and thus there is also delay in reports of deaths.

A further danger is that the virus may be able to increase its lethality. This possibility lies in the high mutagenic capacity of the virus. If, as it turns out, the virus has already managed to make significant mutations, bringing with it some characteristics typical of bat viruses and snake viruses, it means that during its permanence in the human species, it could further modify itself. For example, it could change its receptors, being able to affect other organs besides the lungs, and give other diseases besides pneumonia, affecting blood cells, the immune system, or other vital organs.

The great effort underway is done to avoid the virus into becoming as diffuse as the flu. Its high mutagenicity could transform it from a virus of medium severity, as it seems to be now, into a lethal virus.